Playing in the dirt

Thursday, Friday, Saturday January 23, 24, 25
The Parker 425 desert race is held annually and is part of the desert off-road series called 'Best in the Desert'. This race is actually the second one held here this month. The first was the 'Parker 250' and features quads, motorcycles and side by side type of off road vehicles. The 425 is all about buggies and trucks.

This years event had 17 different classes and over 150 entries. Even though the course is roughly 140 miles long, with that many classes and entries the event runs over two days. The slower classes run on Friday and the big boys run on Saturday. The total length of the race is 425 miles, or three laps of the course.

Thursday is Tech Inspection at the BlueWater Casino. The vendors are out in full force selling everything from tee-shirts to racing transmissions. You can really get close to the trucks for a good look. 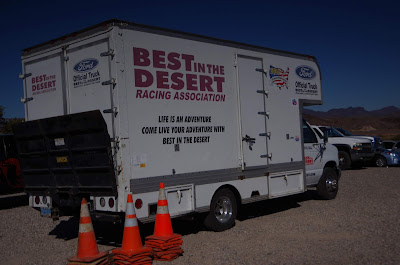 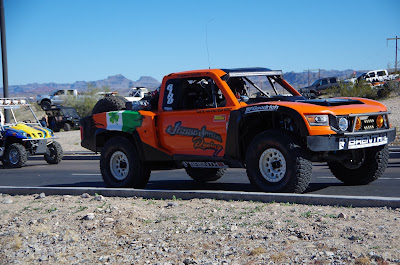 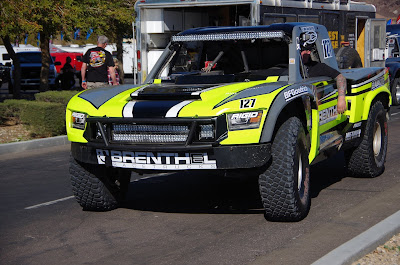 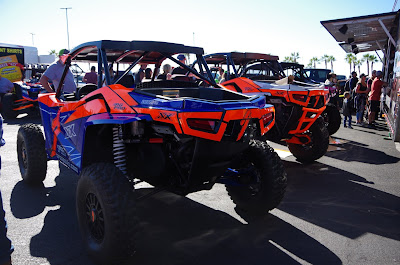 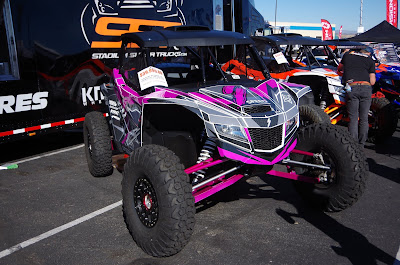 Friday is race day for the lower speed classes. Not that they are slow. The winner of the fastest class completes a 140 mile lap in not much over two hours. Remember this is open desert, not some paved parking lot at Safeway. The attrition rate is well over 30%. 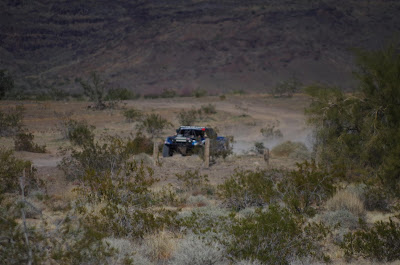 Saturday the big boys (read $$expensive$$) take to the dirt. A number of wrecks and roll overs and mechanical issues. Thankfully no one was seriously injured. Just one co-driver that need an ambulance ride to be checked out by the Doc. 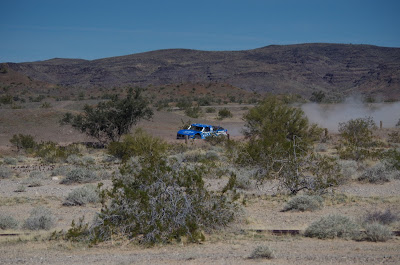 It was a fun couple of days watching desert racing. Thousands of people show up for these events. Many camp in the desert for a week ahead just to get a prime viewing spot. Barbecues and beer are commonplace. Law enforcement tend to turn the other way as long as everyone is having fun. I think we need to come back for this event again next year!

We leave Parker on Sunday and head to Quartzsite.
One last sunset from here: 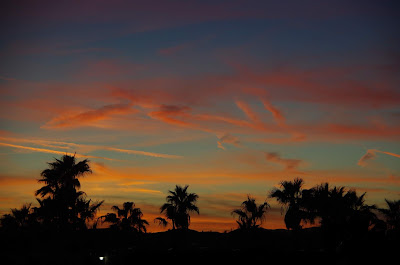 Just hanging out along the Colorado River

Yikes, I haven't posted in a week! Yes, we are fine. It seems when we're busy we have more to blog about. Now that we're just kinda hanging out and relaxing it seems we don't have anything blog-worthy.

So what have we been up to?
We went to a bar. That in itself isn't the story, but it's where the bar is located that makes it interesting. First you head about five miles north of Parker on Hwy 95. Turn on Cienega Springs Road and join the convoy on a very rough and dusty road. About 4.5 miles later you come upon this beer oasis in the desert called Nellie E Saloon - The Desert Bar. You can read more of the story here.The place started out as an old miners cabin converted into a bar open only on the weekends. It is still only open weekends and only in the winter months. They only accept cash, and be sure to come early. We thought we'd get ahead of the crowds and get there before it opens at noon. By the time we got there shortly after 1130 the parking lot was full and apparently the bar was already open. We had a burger and a beer and a good look around then made our way back out in another convoy of vehicles. What a place! Worth the trip.....but maybe just once is enough. 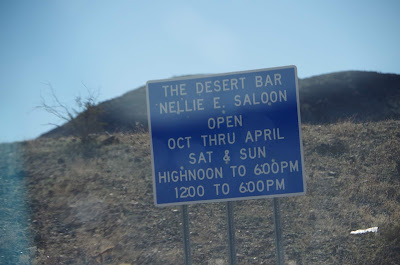 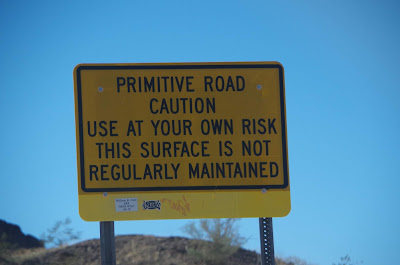 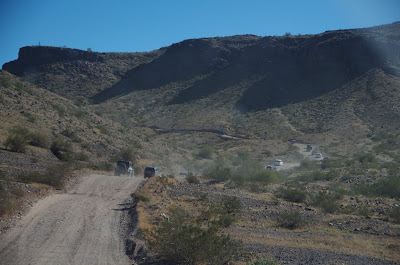 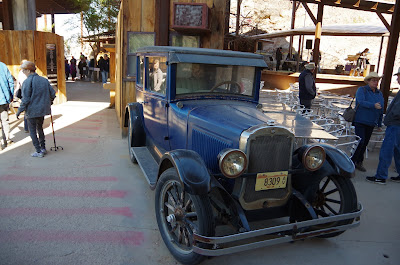 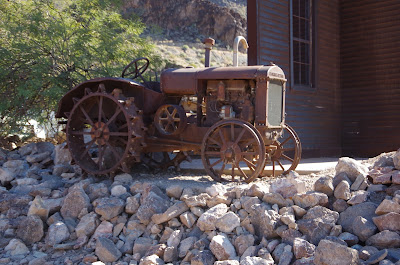 Parker Dam is just up the road from the RV resort about eight miles or so. Although it seems to be a rather small dam in comparison to the Hoover Dam or even Glenn Canyon it does have some unique features. It is the deepest dam in the world. What does that mean? The dam itself is 320 feet high but 235 feet of that are actually under the river bed. You can read more about the Dam here.

The dam was built in the 1930's. Half of its generated power is used to operate the huge pumps that fill the Colorado River Aqueduct. Most of the water for the large metropolitan areas of Southern California originates from Lake Havasu, formed by the Parker dam. Water is pumped from Lake Havasu uphill through four different pumping stations. the water moves through above and below ground canals, pipelines, siphons and tunnels. An amazing project that was built during the Depression.

A few miles south of the Dam is the ghost town of Crossroads. Not much left but for this one old stone-walled building. 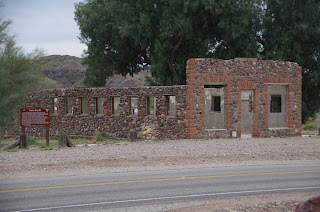 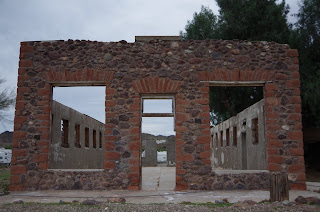 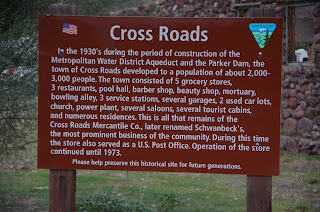 We made another trip back up to Lake Havasu City to do some shopping. We got away with the credit card still intact. I still have mixed feelings about that town. It's a pretty area, some nice houses and lots of shopping but the traffic is heavy and life seems to move at warp speed there. We prefer some quieter areas.

The huge RV Show is on in Quartzsite from January 18 - 26. We figured we better get down there at least one day to see what the vendors had to offer so we went down on Wednesday. We arranged to meet up with a couple of friends and we proceeded to peruse the big tent. We did buy a few things and enjoyed some lunch there (expensive though!). Sorry, no pictures.

A very good reason for going to Quartzsite that day was to meet up with our friends that were camping in LaPosa South long term visitor area. We arrived a bit early for Happy Hour but that didn't deter us. It gave us more time to enjoy a great visit with the crew. A big bonus was Ken and Shirley (Seeing America with Ken and Shirley) were there. We were concerned that we would miss seeing them entirely this year. We had a great visit and if all goes well we may get to see them later this spring in northern Nevada. As for the rest of the gang.....we'll see them again next week when we move from Parker to Quartzsite. We also took the time to toast our friend George (Our Awesome Travels) who recently passed away. Bill said some heartfelt words echoing what we all felt about George. In fact if it weren't for George I doubt that any of us would have met each other. Now here we are enjoying each others company in the great Southwest that George loved so much.

The 'Parker 425' desert truck races are on this weekend so we're going go watch some very expensive toys play in the dirt.

We did get some nice sunsets this week. Here's a couple: 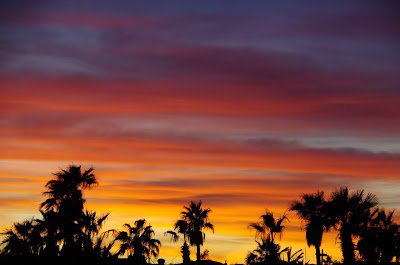 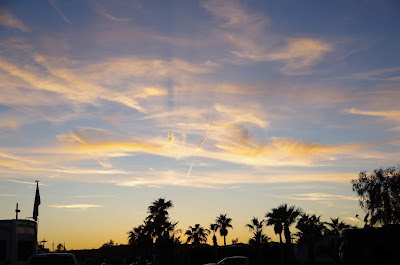 Cheryl and I live in Red Deer, Alberta. Transplanted Manitobans we have lived in Red Deer since 1990. We have two married sons and three grandchildren.
We have camped most of our lives.....off and on. We have been in a tent, a truck camper, a conversion van, a travel trailer and now a 37 foot Cedar Creek fifth wheel which is ideal for extended stays.
I retired at the end of June 2017 and have lots of travel plans for the next few years. Hopefully somewhere warm in the winter and summer!